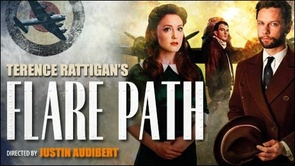 The Palace Theatre, Southend on Sea
16th - 21st November 2015
The set of a small hotel lobby with a warm fire burning greets us as the play begins.  Terence Rattigan wrote Flare Path in 1942 and as each character is introduced to us you sense that he had more than likely based each one of them on a variety of people that he had encountered during the War, such is the believability of their characterisations.

Set during World War 2, the play introduces us to the women who regularly wait for their husbands to return from their RAF bombing missions after they take off from the aerodrome located near to the hotel.  It is, of course, a bleak affair having to constantly be worrying about whether your loved one is going to return but Rattigan has thrown some light into the gloom of the piece by creating some lovely humourous moments.  In fact there are points in the play that are so amusing, one wonders if this could almost be classed as a gentle comedy in some places.

The first piece of excitement is drawn from the arrival of Peter Kyle played by a suave and assured Leon Ockenden.  Kyle is a famous Hollywood actor who, as it turns out, has appeared in a Broadway production with one of the officers' wive’s, Patricia Warren, played with great angst by Olivia Hallinan.  Patricia is also an actress albeit not anywhere near the heady scale of Mr Kyle.

There is much glee from Doris, or ‘Countess’ as she is respectfully addressed, after marrying the Polish flying officer, Count Skriczevinsky, and who simply cannot believe that one of her film idols is actually in the same hotel.  The Count and Countess are deliciously played by Adam Best, giving us a good chuckle with his wonderful Polish mispronunciations, and the adorable Siobhan O’Kelly who completely endears us with her sweet affectations and pet names for her husband.

Rattigan has given this play some underlying intrigue when we realise that the reason the ageing actor has turned up to this Lincolnshire hotel is because Kyle and Patricia have hatched a plan to run away together, as it becomes apparent that they have been former lovers whilst performing together in America.  He has now come to steal her away from her husband of less than a year, Flight Lieutenant Graham.  Graham otherwise known as ‘Teddy’  played by Alastair Whatley in an absolute peach of a part.  He sweeps through a whole gamut of emotions during the play, ranging from hysterical buffoon to lovestruck fool to a man on the verge of a breakdown; and really tests the loyalty of his new wife.

Alastair Whatley, Adam Best, Simon Darwen and William Reay pose for photos for Stephen Hawke today at The Palace Theatre
Of course, the seriousness of the play is brought to the fore when the husbands are sent off on a mission and through the huge window looking out into the night from the hotel we almost feel as if we are in the same room and sensing the same doom as the women. With each plane taking off and fabulously roaring over our heads into the skies above, will we ever know if the men shall return or not; or whether the enormous strain of flying head on into the eight or nine hour sortie of flak, searchlights and night fighters over Germany will affect them when they return to terra firma and into the arms of their loved ones again.

This play is centred on the men fighting the War but is just as much about the women who have had to learn to adjust to their new way of living, making sacrifices and making do.  The most significant instance being Maudie Miller played fabulously by Shvorne Marks, who while her husband is risking his life shooting down Messerschmitts, has had her previously somewhat charmed life turned upside down with her house in London being bombed and having to give up being a housewife to work in a laundry in order to make ends meet.

What I like about this play is that it’s simply told, yet still has the impact to make you think.  It’s not just about the conflict of war but the conflict of loyalties and passions that inevitably were rife throughout wartime.  This production shows us real people in a period that firmly makes us believe that what we are seeing on stage could have quite easily have happened - perhaps it did.   Indeed, Rattigan wrote a line in Flare Path about a character called Ginger Walsh.  He was in fact a real person and was shot down by the Luftwaffe.  He ended up being the sole survivor and his memory is poignantly brought to life in this play with an officer informing the visitors in the hotel, “A for Apple has been shot down and Ginger Walsh has survived by baling out.”  An echo down the generations that we, in our comfortable modern lives, should be privileged to witness because we owe an awful lot to people like Ginger Walsh and the many many others just like him.


Flare Path is on at The Palace Theatre until 21st November 2015.
For more information click on www.southendtheatres.org.uk or call 01702 351135 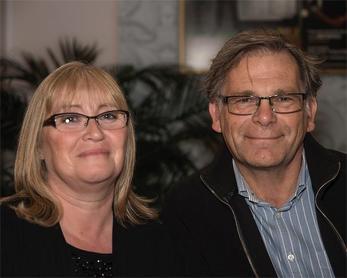 What the audience thought

“I didn’t know the play at all.  I saw Birdsong which was so amazing and very powerful but this is a very different story so I can’t really compare the two plays.” “It took me a while to warm to Teddy but thought he was fabulous in Act 2.”

“I thought it had a similarity to Birdsong in that it picked up different characters who were seeing war in a different way.  It had an interesting dynamic and struck a good balance.”  “It wasn’t as shockable as Birdsong.  I found it very uplifting.”